My friend Terrance and I last minute decided to visit London for New Years Eve, so we booked a hotel and headed to the train station in Swindon. It was my first time using the train here so after we arrived in London I had to buy an oyster card for the tubes. 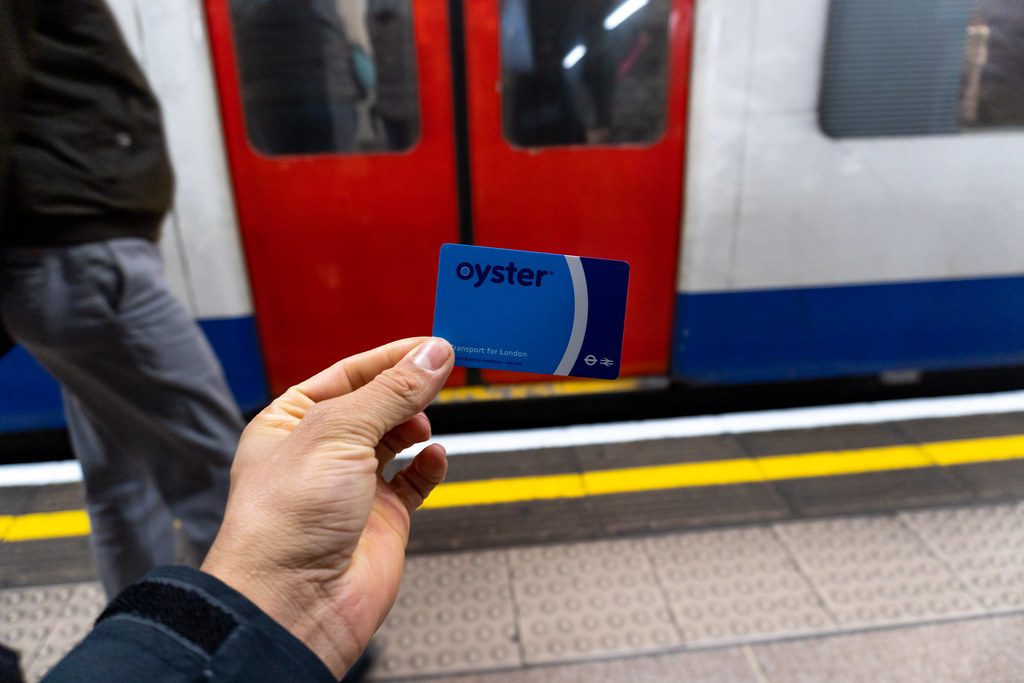 We did get a little lost on the way to our hotel, I seem to ALWAYS get lost/confused when taking new subways. After jumping on a different line we made it to Earl’s Station and had a short walk to the hotel called Ambassador. Along the way I saw a decent amount of nice cars just scattered along the streets. 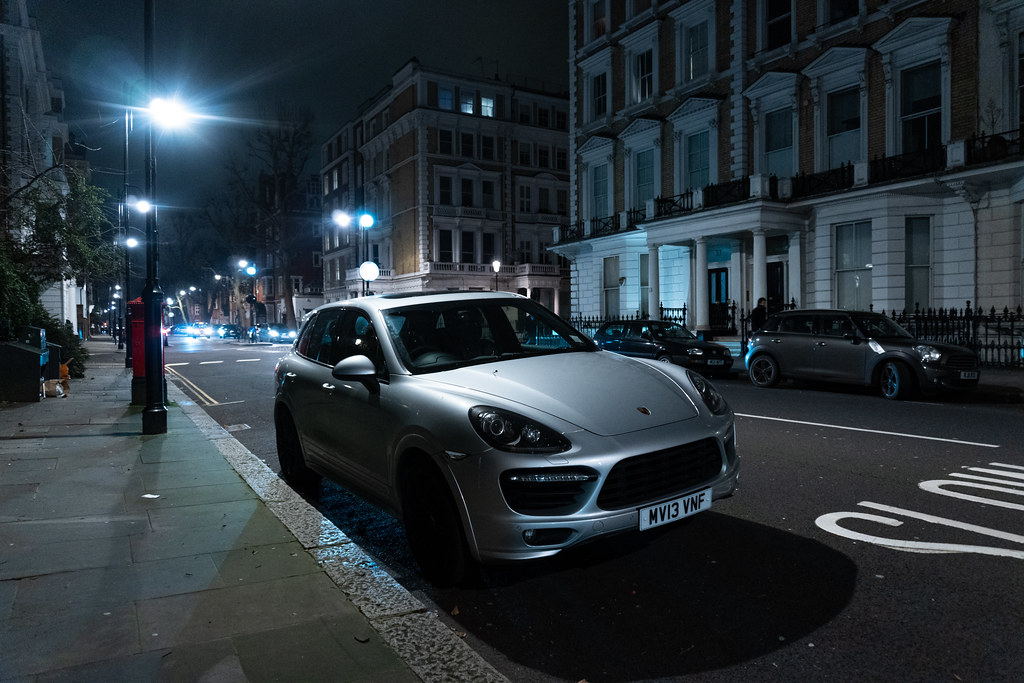 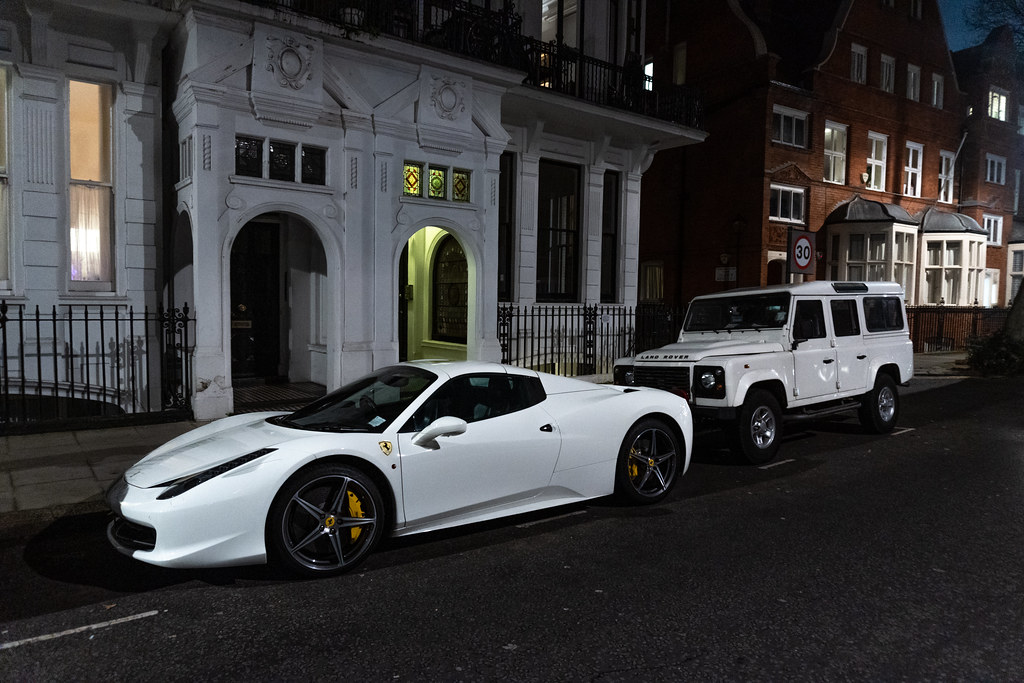 After we dropped our bags off I did some quick yelping/googling for a place to grab food. I decided to check out a place nearby called The Hereford Arms, it was only a short walk away.

For a starter I order the South Coast Confit Pork Belly that was served with an apple ginger puree and hazlenuts. The pork belly was grilled nicely but it was very plain in my opinion. I often hear that in the UK they don’t season their dishes that well and I’m starting to pick up on that. 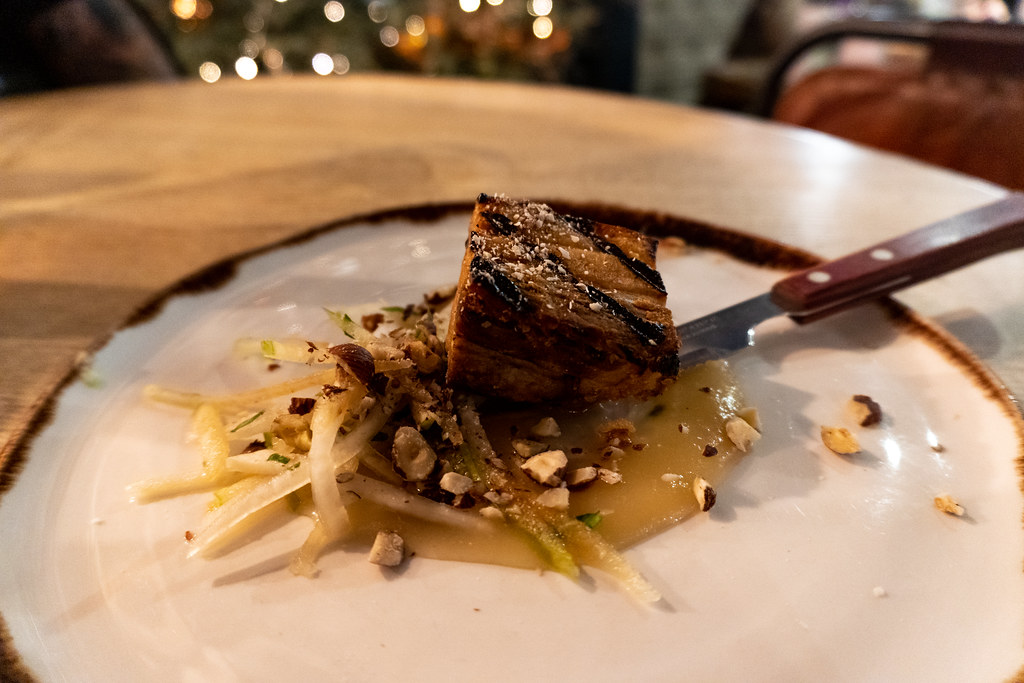 Terrance ordered the Calamari which I feel is hard to mess up, it tasted nice but for some reason the dipping sauce was underneath the small mound. 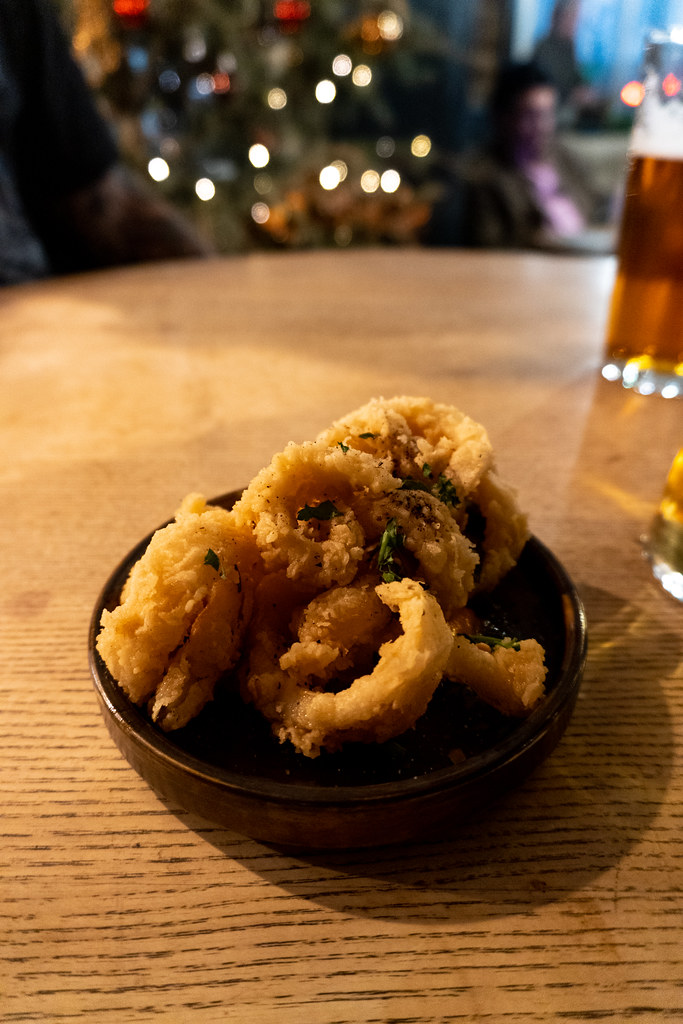 I wanted to finally try fish & chips since I guess that is a popular dish for this area. It was Frontier beer-battered haddock with triple-cooked chips, crushed peas and tartare sauce. When the dish came out I was really confused by the peas and thought it was avocado, must be my California side coming out. The fish was fried to perfection with a light crunchy crust and the thickly cut steak style “chips” were great. Of course we had to have a couple of beers with our meal, I chose Asahi and Terrance sipped on Sierra Nevada. 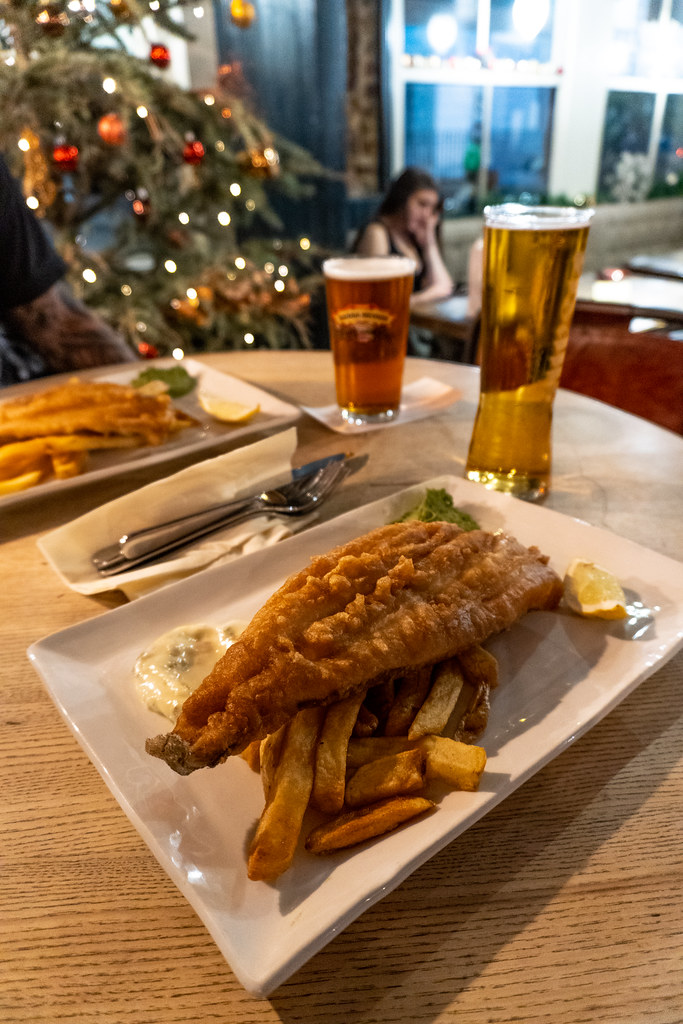 By the time we finished eating we had about 45 minutes to make it to a decent spot to watch the New Years fireworks show. There was a TON of cool cars driving around but I didn’t get many photos of them. 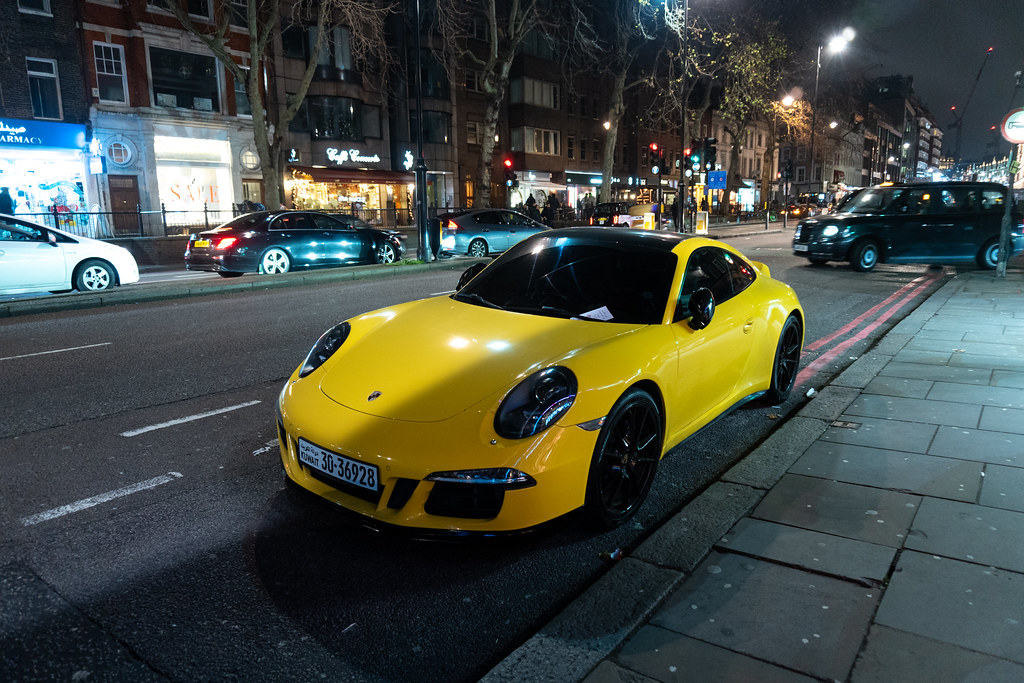 We first stopped at the Buckingham Palace, it was nice to see but there was a lot of people there and so much trash everywhere. 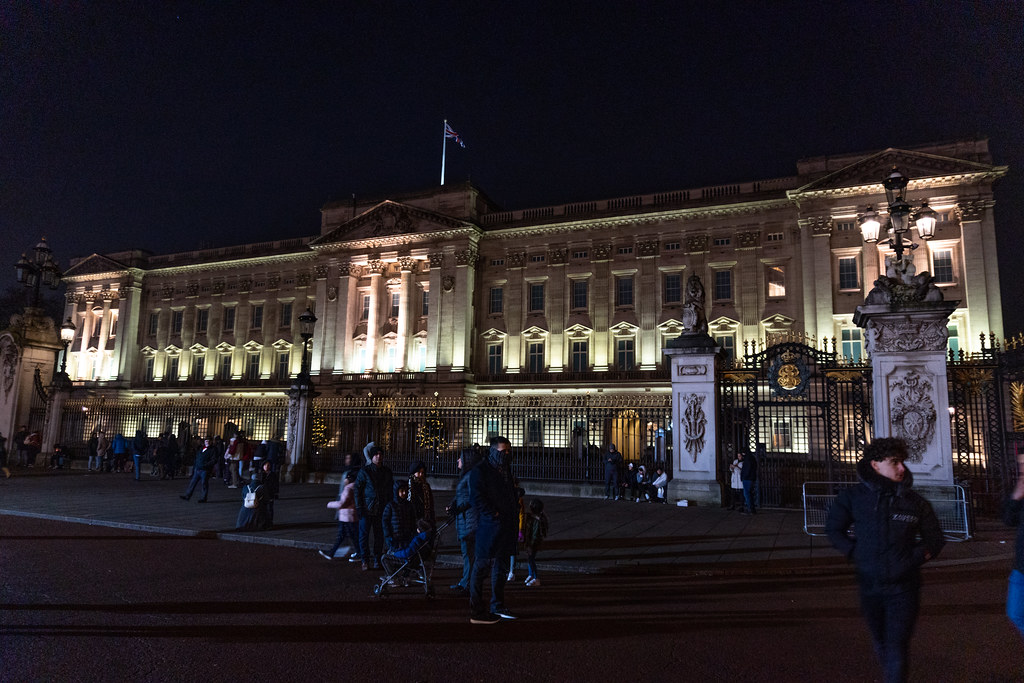 After about 15 more minutes of walking we stopped near the London Eye and waited for the countdown. 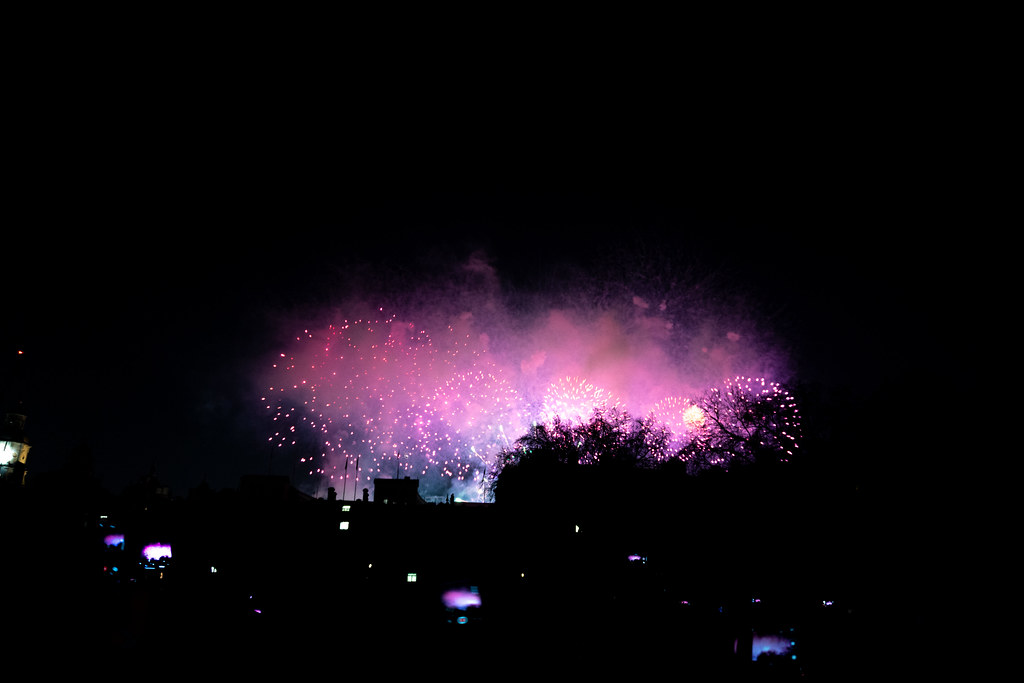 The next morning I got a sample of what London is like, we took the tube to Picadilly to check it out. The large screen looks kind of like the ones in New York I think. 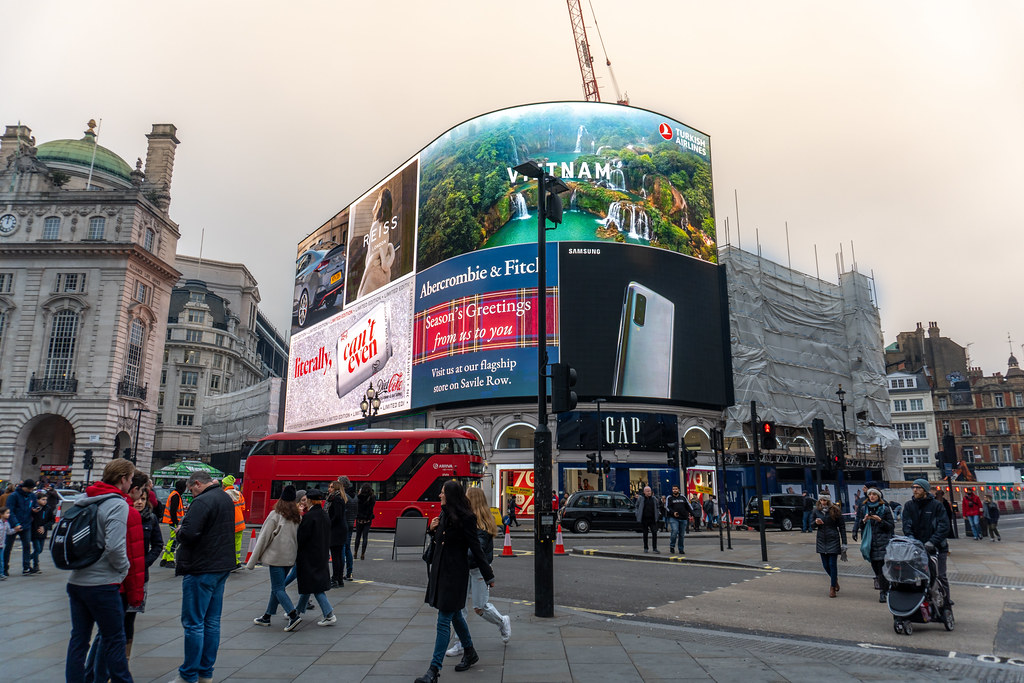 I wanted to experience a tea room while we were there so again I resorted to yelp/google and found a place within a 5 minute walk.

The walk took us past this cool little chinatown area 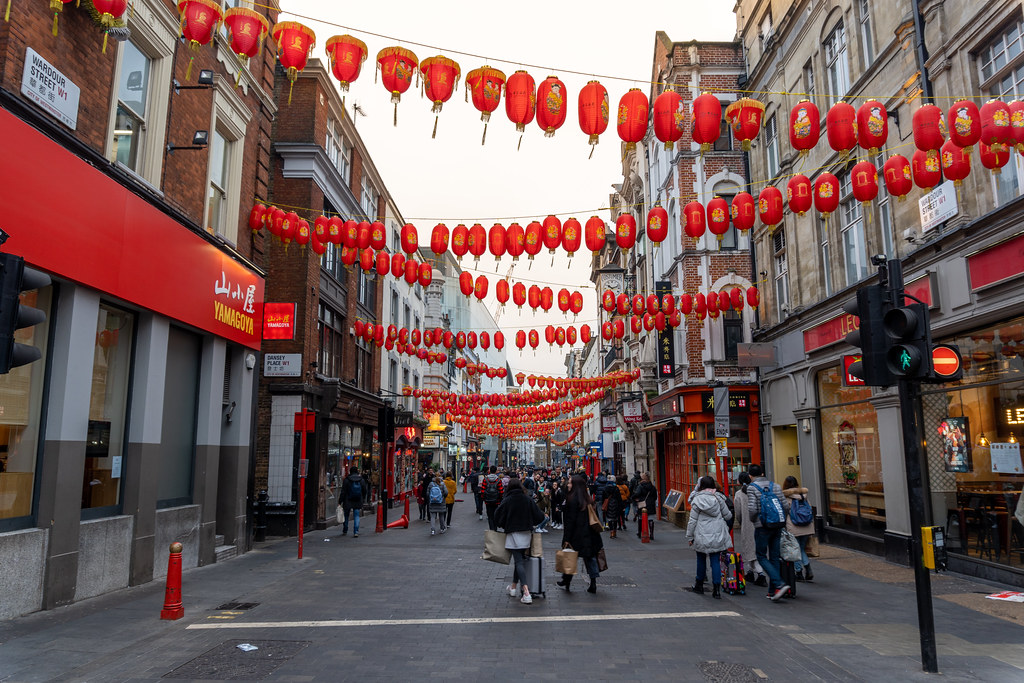 The inside of this place was very small and kind of uncomfortable but I wanted to go through with it. The setup was also very strange, you walk in, order immediately then sit wherever. We sat upstairs where it was also very confined, I’m not claustrophobic but this place was just a little too small. 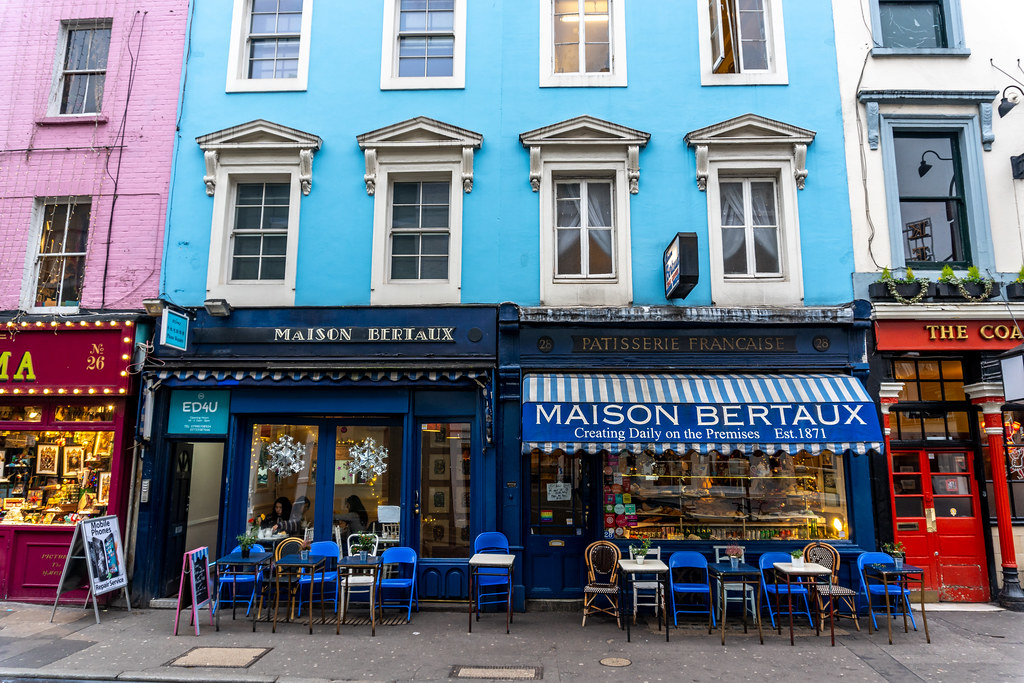 I ordered a scone and english breakfast tea while Terrance ordered red wine and some pizza type thing. 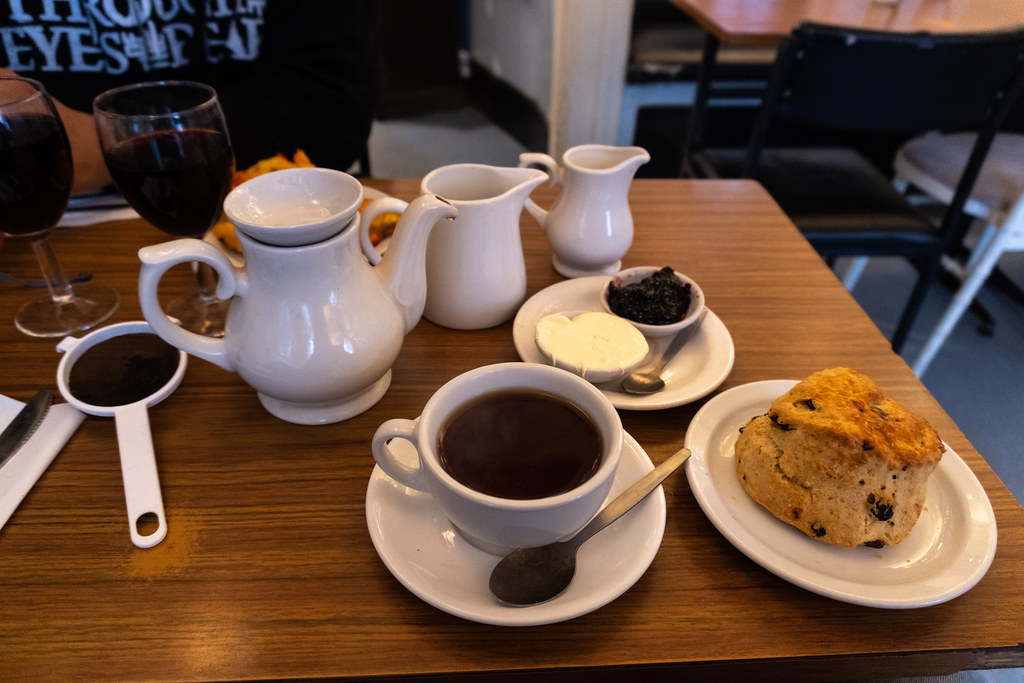 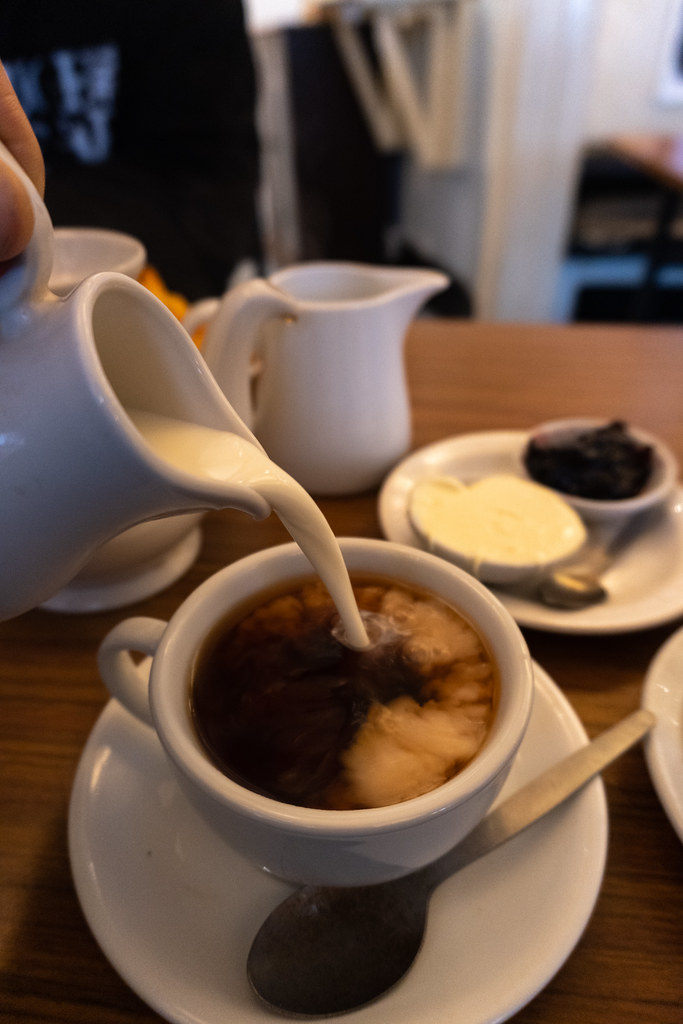 I don’t feel like there was anything too special about this place but it also wasn’t quite the tea experience I was looking for. 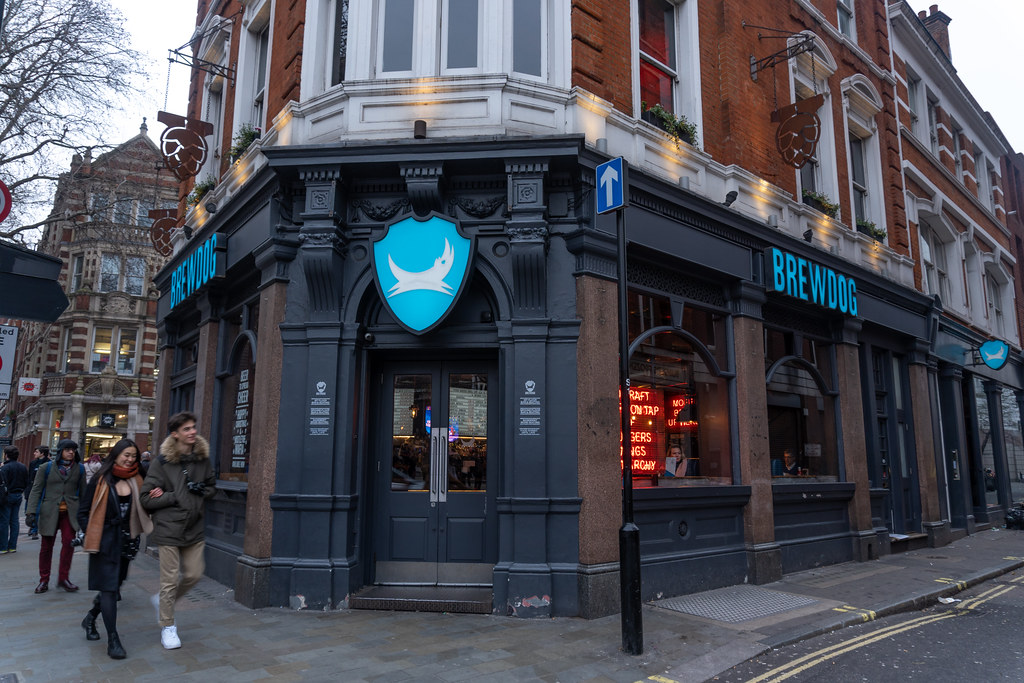 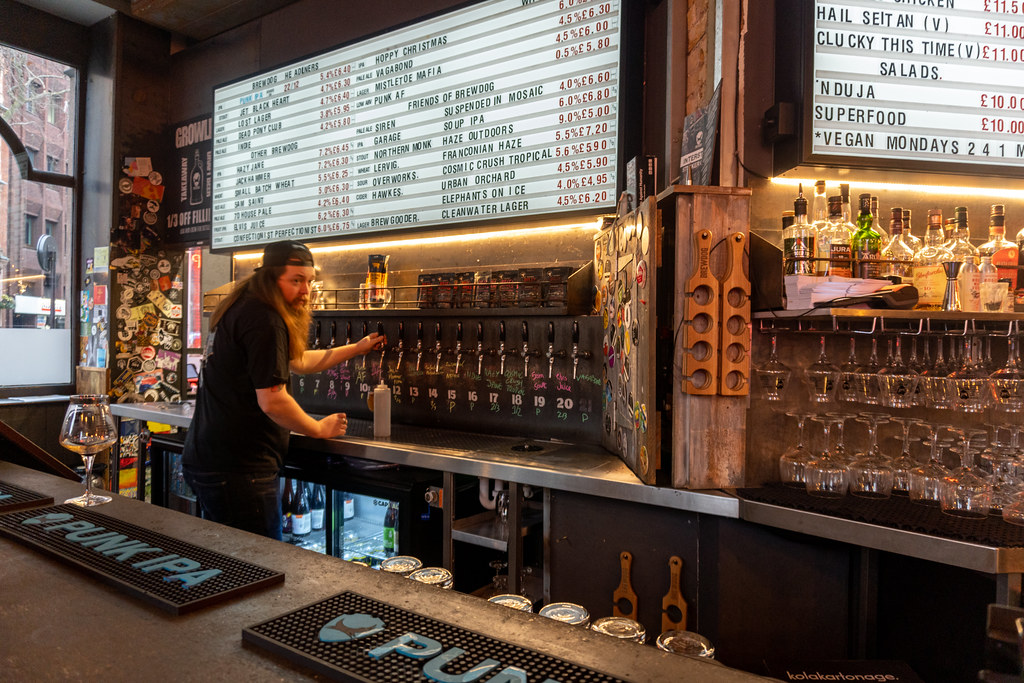 I forgot what beer we ordered but they were… beery… I don’t have good grasp on beer tasting quite yet. 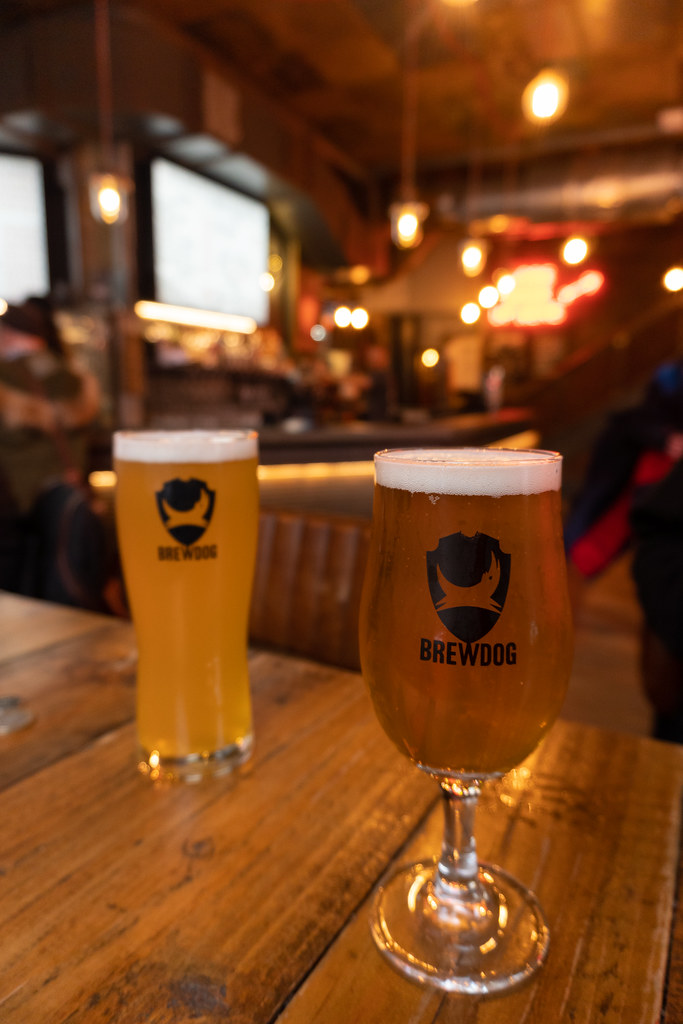 Time started to tick so we made our way back to the station just to get on the wrong train lol. After correcting our mistake we eventually made it back to Swindon. For what it’s worth, we had a pretty good time in London for it being such an extreme last minute trip.